Todays post is about my paint job of the Rogal Dorn.  He has been a favourite character of mine since the very earliest days of the Horus Heresy story.  To the best of my knowledge both he and the Imperial Fists were introduced in the Original Space Marine Game (1989) in a short story. 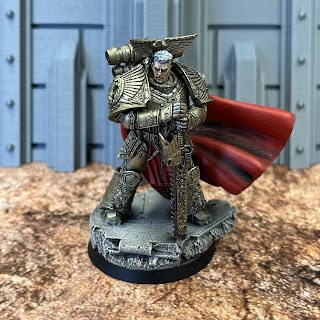 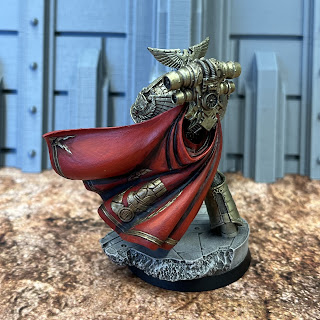 I decided I wanted an older looking gold to the normal Retributor Armour that’s become a common tool in the armour.  With this in mind I painted him using Gold from the Vallejo Metals, then washed with watered down agrax, following up with a light drybrush of the original gold.  The faces is the awesome Guilliman flesh contrast paint, it gives a good base for skin, better than I can achieve with a brush.  The clock is a mix of washes, blending, and contrast paints.

Overall, I’m very happy with how he has come out.  That’s two of 18 completed.  Probably going to be progressing Perturabo or Finishing Magnus the Red next.

Todays post is about my second tracked vehicle for my Iron Warriors legion forces.  This is a resin model from ForgeWorld which has sadly in the process of being discontinued.  Happily it’s looking to be replaced with a plastic set coming imminently.  This is the first of two I currently have for the Sons of Perturabo. 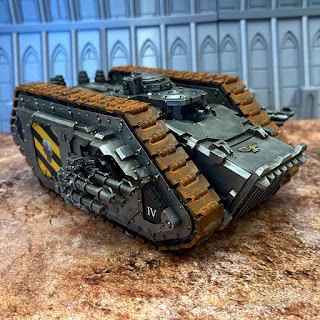 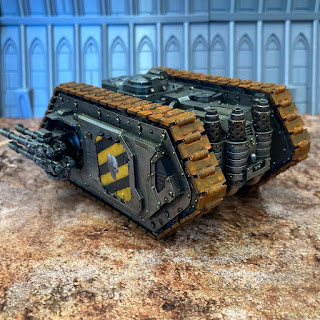 Again, this has the rusted tracks, black panels, and chevrons to break up the metal.  This doesn’t have so much detail and took fewer hours.  So far i am enjoying painting ”The Iron Forth”.  They give a very effective paint job without the effort other legions have required.

So what do you think?  Has the scheme been effective? Are you looking forward to a plastic Spartan and the updates to the Horus Heresy?  Let me know in the comments below.

Todays post is a little project I’ve been working on in preparation for Heresy 2.0.  It’s a heavy support option for my Iron Warriors.  This took a fair while to paint compared to the other tanks I have completed owing to the open back and crew.  This is the first of three I intend to get.  I have a second in bits already. 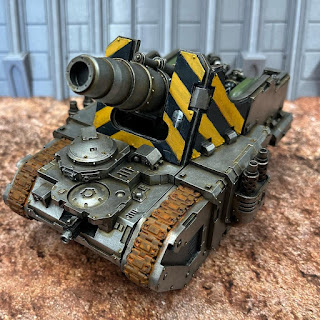 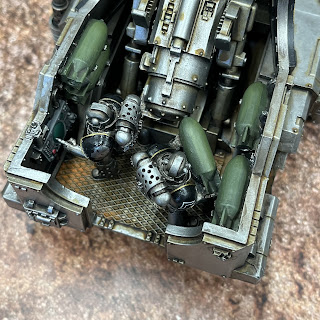 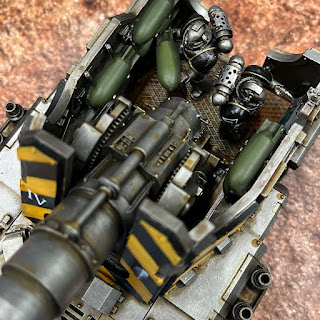 I hope you like the model, I added heavily rusted tracks as I assume it’s a sacrificial coating to protect the layers underneath safe from corrosion.  I think it looks pretty good and makes it less all metal.  I’m thinking the piece may need a little weathering.  Chipping and a bit of streak and grime maybe, but that’s a job for another time.

Today’s post is about a new piece of terrain I’ve been printing for use in fantasy game system, initially Skyrim by Modipius Entertainment.

This is a model I purchased from Myminifactory.com from Dark Realms.  I have no relationship with this manufacturer.  The main criticism I have is the lack of information about the model.  There where no internal shots, no breakdown of the the parts sold, and no information on supports.  I shot the designer a query and he responded really quickly.  I also found images on Instagram and the Dark Realms Pateron.  This information gave me the confidence to buy the model. 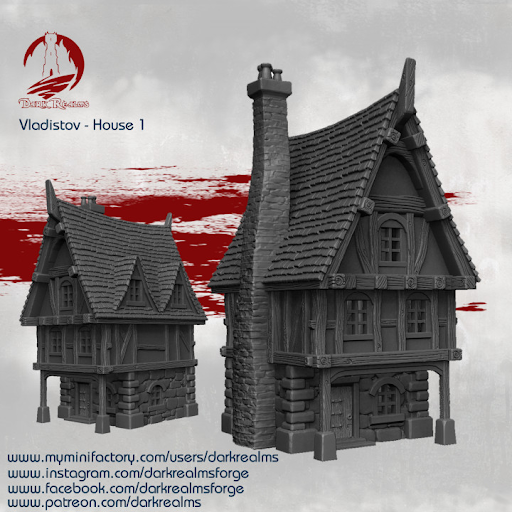 The model comes in three configurations.

I choose to printed the second configuration with a solid roof.

I used the standard settings of my Prusa I3 MK3S without supports.  As you can see the model turned out great. 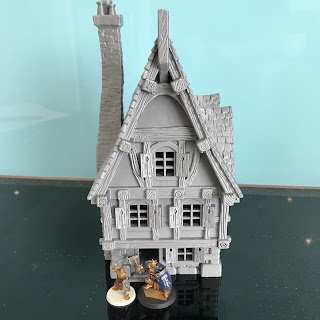 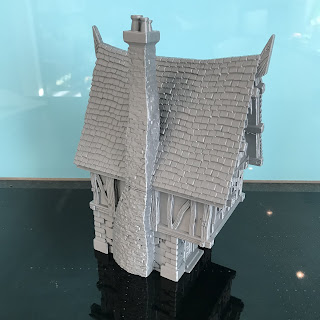 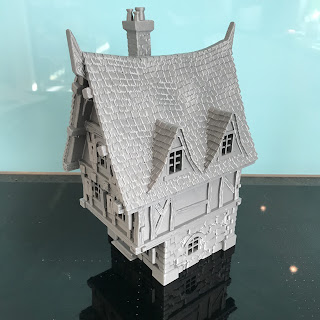 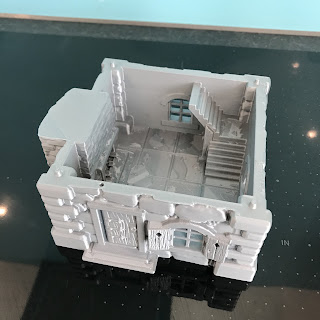 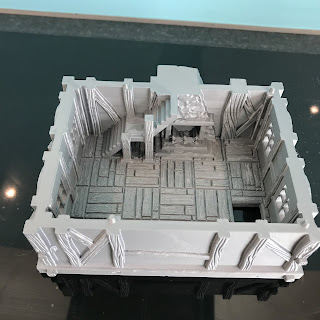 This is a good buy and I would recommend it.

Today’s post is about the recent TOC (UK) 2021 Titan Walk.  It was an amazing day and it’s mostly arranged by the Battle Bunny And TOC founder Drake Seta and partner (Instagram Honey_the_Destroyer89), though myself and some others also helped with Scenery.

The event started Friday with a set up and then a drink in the bar, followed by setting up titans and then a view around the event room. 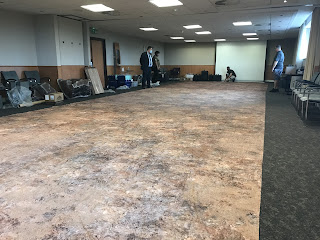 Above: The gaming mat.

Below: part of the initial set up. This was around half the Titans.  For  more images see Titan Owners Club’s blog. 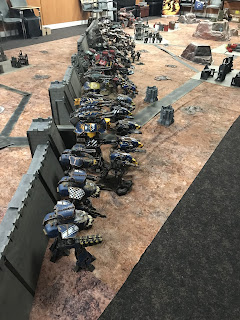 The next day had the last engines and Princeps arrive, a final Line up of engines and meet a greet with the newly arrived Princeps. 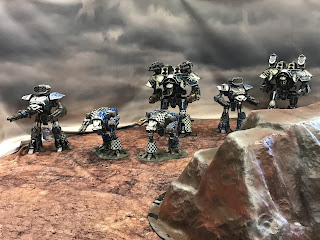 Above is my Maniple arrayed for combat.  I lent out a couple of knight lancers, but more on them later.

Day one was an interesting scrap against Ignatum, Atarus, and Gryphonicus Engines.  My maniple suffered badly under their the guns losing a warlord, two reavers and two warhounds. In return I manage two reavers.  It was bloody, scrappy affair. Ultimately, I was hampered by hills obscuring my fields of fire, so my heaviest engine struggled to engage. 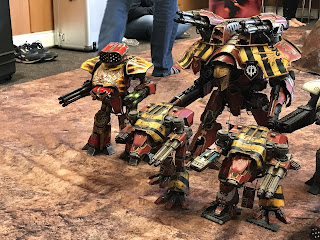 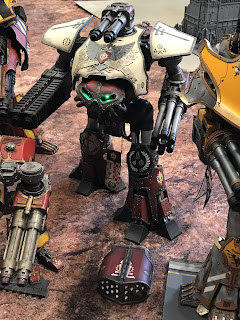 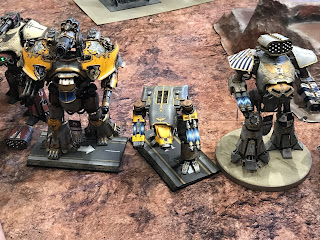 Above: The combined forces of Ignatum, Atarus, and Gryphonicus pound the Tempest Maniple. 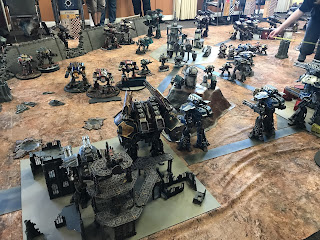 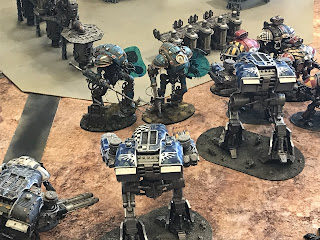 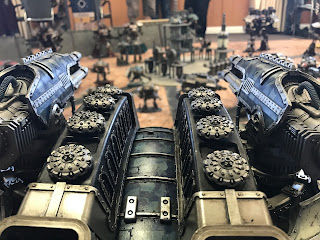 Despite my initial failure to issue any orders whatsoever ever, I ultimately managed to claim a Warlord.  Bellator Ferrum managed to bring the shields down on a trio of Warhounds, opening the way for a Mortis warlord to turn two of them into slag a moment later.  One of my Warlords targeted an enemy Titan with its volcano cannon.  It missed and the blast scattered (3 foot) onto an enemy knight banner. Unfortunatley, it also nearly wiped out an allied knights banner too! The final toll was both warhounds lost, one to a lancer, the second to the ordo sinister!

In another part of the battlefield my Makabius lancers, working in support of a Mortis Reaver, managed to bring down a Warhound.  Another amazing kill on my Legio Banner.

It was a really fun event and I can’t wait until the 4th September when we are running an exhibition game as the Greeting from the Warp event near Northampton.  Titan Owners Club members are an amazing bunch of people!!

It has often felt like events were a thing of the past, but today I’m attending (and have helped organise) the 2021 Titan Owners Club (UK) Titan Walk. A big shout out to Drake Seta from TOC and the Battle Bunnies for doing most of the leg work on the event.

I’ll aim to have a post with Pictures of the event over the next few days, but until then here are pictures of some of my Engines that are in attendance. 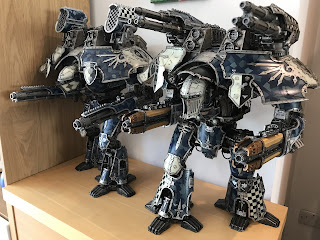 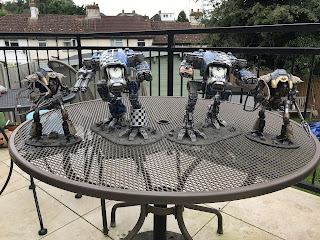 The swift killers, Warhounds Inunadatione Lacrimae (left) and Credit Pluvia (right), with a brace of Knights Lancers from House Makabius. 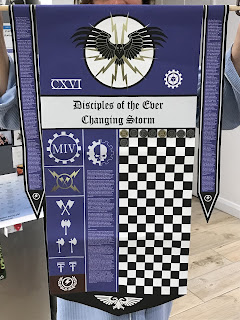 My maniple Banner, with the current kill tally that the maniple has achieved.  The gold pins denote Warlord Engine Kills.
Unfortunately the Warbringer Nox Terrorem is not in a state to walk this year.  Hopefully it and the other maniple mates undergoing the rites of construction will be ready to walk next year.

Today’s post is a model I printed and painted a little while ago.  this is a Mechanicum Minotaur Proxy for the Ordo Destructor lists.  It’s a lovely model and a will need to print a couple more.  It’s painted in the traditional Red of the Martian forces as it generally will be accompanying my maniples (from the loyalist elements) of Legio Tempestus to war. 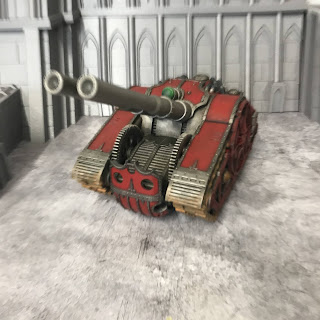 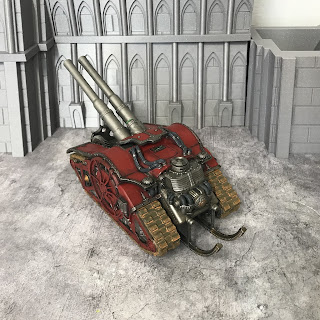 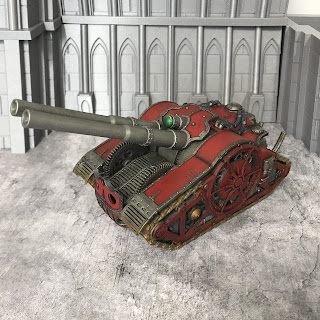 I can fully recommend this model as it printed nearly perfectly.  The only issue was my fault as I didn’t get the orientation correct and there was a bulge that needed sanding.

The model was printed on my Mars 2 Pro and AnyCubic Mono X.