I've decided to build up a large 15mm Force of the 11th Armoured Division. Theres a number of reasons I choose this formation:

1: The unit insignia is super fly cool.
2: They had both Shermans and Cromwells.
3: They played a role in most of the major battles of the Western Front campaign.
4: They where the only unit in the British Army to be fully equiped with Comet Tanks prior to the end of hostilities.
5: And lastly but not least, the availbilty of transfers is pretty good (got mine from doms decals)

I'm in the process of assembling:

When it comes to painting, I will be giving each troop the squadron markings. This is so I can tell which tanks belong to each troop without needing to paint numbers of finding some very small transfers. I may change my mind before I finish painting though.

Just to round out the force, I have also bought a box of the new, and excellent PSC late war british infantry. I'm building one platoon with individual bases, the rest I haven't yet decided on, but may get these based for FoW. 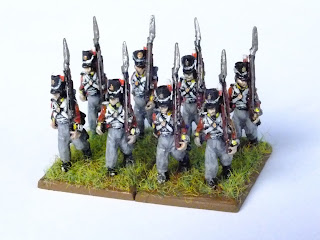 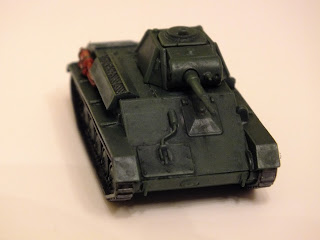 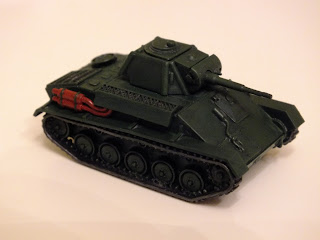 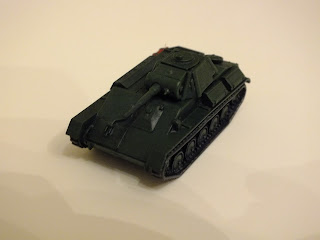 Not massivley happy with the results so far.  I like the colour, but the coverage was not great.  When I did a wash it seemed to strip some of the paint from the recesses.  The exhaust is not quite ready.  Needs a wash of black and blue ink.

The whole tank then will need varnish and weathering, but this will need to wait until the good* weather comes.

The other 4 T-70's I have will be getting a proper black undercoat, then the Tamiya paint.  I'll see what happens then.

*In the south east of England this comes but once a year.

My Dreamforge Games Kickstarter stuff has has arrived!!! 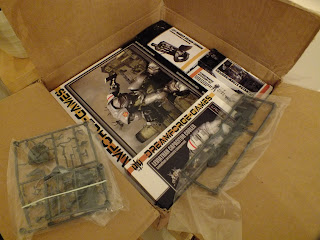 So I built a little something.  The left hand vulcan cannon. 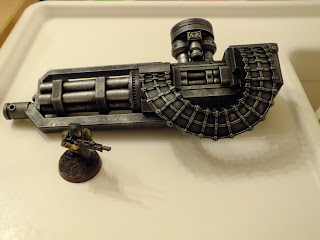 Was an interesting build. Generally a very nice kit to build. I got outside over the last two days and got to undercoat it.  So far very impressed with this kit.  Only problem was the ammo belt doesn't line up 100%, but a very light file and its all good.

Only one thing else.  I haven't got the faintest clue what these are.  Hopefully these are not important. 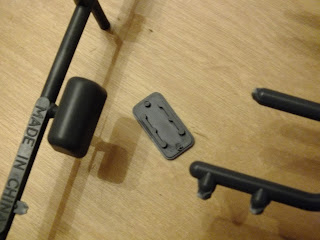 I've been a little bit busy while waiting for my Dreamforge Games Leviathan to arrive.

PSC have rapidly become my favorite model maker of 15mm WW2 stuff.  Cheap (well compared to the market) and extremely well made.  Not to mention, very little in the way of mold lines and a burgeoning range and excellent customer service.  They make me HAPPY!!

I don't as yet have the models assembled for one complete force.  Because that is not how I roll. 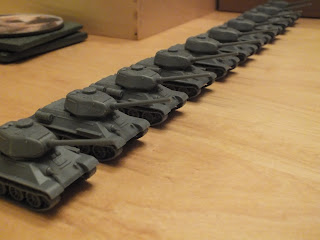 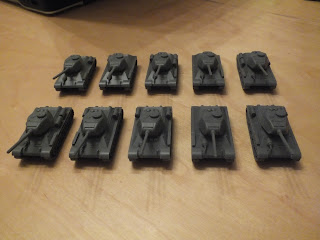 And my five Russian T70 light tanks.  I have started to undercoat (Tamiya AS-1 Dark Green(IJN) Scale 100ml 86501) this little boys, unfortunatley the weather has closed in and its now too cold to spray. 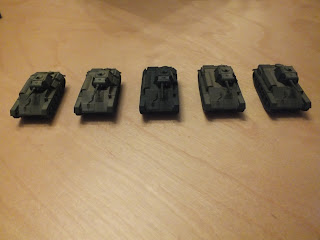 Four Tigers on the prowl.... Tiger 1E.  The intention is to paint these using tamiya sprays and masks to get the camo.  I'm going to be aiming at a heavy ambush camo pattern. 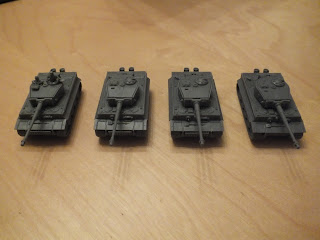 All five Panzer IV's are now assembled.  These will be base coated in middlestone, but I haven't decided on the camo.  Possibly dark green stripes/lines?  I think I want to test out on an old BF stugG model first. 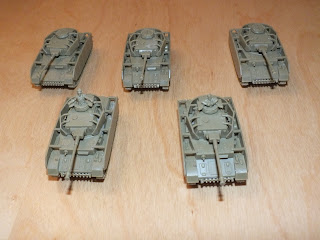 I haven't included the british shermans I have in this post.  I have assembled a few more since my last post, but I'm waiting to recieve two consignments of British armour spray cans from Battlefront.  Until this happens I i'm struggling to motivate myself on the models. 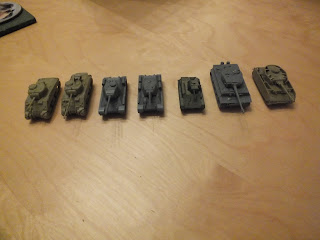 In the picture the T70 is next to the Tiger 1E.   I have so much respect for the guys in these little tanks facing the monster Tigers 1 and 2 (and Panther).

The next 15mm WW2 update will be specific to the type of tank I decide to takle first (probably the T70s).
Posted by Col. Hertford at 20:12 No comments:

Hi this is an update on the FW contemptor Dread. As can be seen from my previous post, I decided that Death Guard where the way forward.  The colour scheme is from the forgeworld painting guide here. 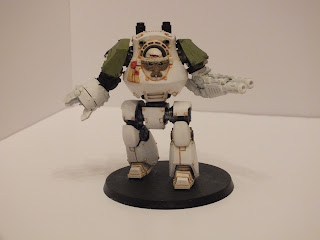 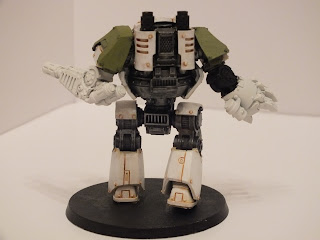 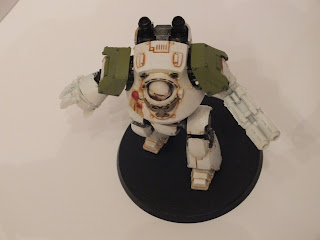 I love this model, it was a real joy to build and paint.  I will definately get a full talon of three.  I'm aiming to finish the claw and multimelta this weekend.  Weathering will wait until the transfers arrive. 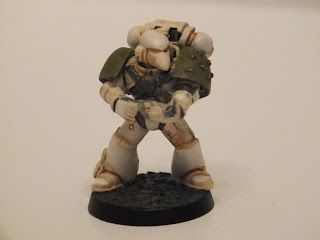 This is the infantry test model.  So far quite please with the results so far, but still needs some tiding up and a weapon.  I'm going to base the army on an ash wastes style base.

My model painting and bloggin have been decidedly shakey for the last few years (due to two wonderful additions to my family).  So to start 2013, I have decided to start a new army.  Over christmas I got given some money from an unexpected source.  Now most of the cash will end up on the mortgage, but I have decided to treat myself with some new toys as well.

Since, my birthday I have been pouring over the FW Horus Heresy Book 1.  Well, once the money came through, it was a no brainer what era to go for.  Orginally I was thinking a Space Wolves or World Eaters army, but then I saw the painted death guard on the FW site it became obvious.  I'm going to post up pics of my Contemptor Dread when its finished. 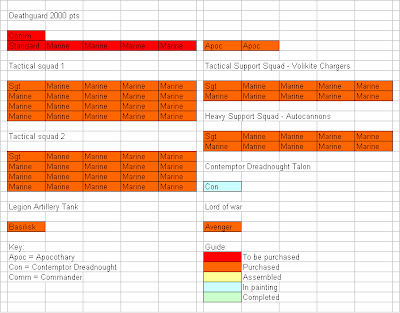 So far I have not real timescales for this project as I need to fit this round my, Family, job, study and running, but if I can get a few models completed in January, I'll be happy.
Posted by Col. Hertford at 19:48 No comments: